Architectural drawings are intended to communicate design intentions in a clear manner. This can be best presented with graphic symbols and written forms. Industry standards have been developed to provide a universal language of graphic symbols and written forms for different design companies and building professions. Typical drafting standards and symbols are described below.

Along with line weight and quality, there are standards for different types of lines. Each has a definite meaning and is recognized as a typical symbol or object within the building trades industry. Listed below are the standard types of lines that will typically be used in design drawings.

Solid lines are used to indicate visible objects that can be seen in plan, elevation or 3D views. Solid lines are also used for leader lines and dimension lines.

Hidden objects or edges are drawn with short dashed lines. These are used to show hidden parts of an object or objects below or behind another object. Dashed lines are also used to indicate shelving or cabinets above a counter. These lines should be in contact at corners and when perpendicular to another line.

These lines are a series of dashes and very short dashes and are used to show movement or imply direction. These typically are used instead of a dashed line to show an alternate position of an object that can be moved. One object would be drawn with a solid line and its alternate position would be dashed or a phantom line. This can include bi-swing doors, the space needed for drawer and cabinet door openings, sliding door opening direction, hinge points for doors and windows in elevation views, etc

Leader lines are used to connect notes or references to objects or lines in a drawing. Leader lines start as a solid line and end in an arrow. Leader lines may be drawn at an angle or curved.

Break lines are used when the extents of a drawing cannot fit on the size of paper being used for the drawing. It can also be used when you only need to illustrate a portion of a design or a partial view.

Center lines are used to indicate the center of a plan, object, circle, arc, or any symmetrical object. Use a series of very long and short dashes to create a center line. If two center lines intersect use short dashes at the intersection.

The dimension line is used to show the measurement of an object. It can be used to indicate length, width, diameter, etc. The dimensions are listed in feet and inches on floor plans and elevations. Detail drawings of cabinetry or other custom pieces are dimensioned in inches.

Material symbols represent the construction materials cut in section. Below is a list of materials and their symbols used on architectural drawings.

Section symbols are used to indicate where sections are cut. The section mark consists of a 1/2″ diameter circle, an arrow that indicates the view direction of sight which is filled solid black, and two numbers. The upper number tells the section number on the sheet and the lower number indicates the sheet number where the section is drawn. Generally a section call-out is composed of two same section marks, one on each end of the cutting plane line. 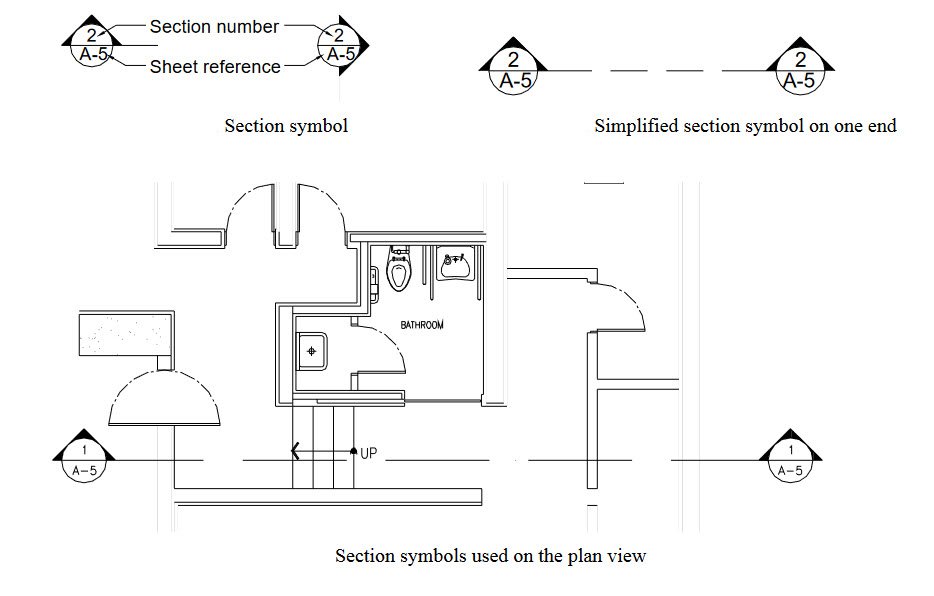 Elevation marks are used to indicate which direction and from which point on the floor plan is drawn. The elevation mark consists of a 1/2″ diameter circle, an arrow that indicates the direction of sight, and two numbers.

Detail drawings are identified by a detail mark composed of a 1/2” diameter circle and two numbers. The upper number tells the detail number on the sheet and the lower number indicates the sheet number where the detail is drawn. The feature that needs a detail drawing is enclosed in a large circle and connected to the circle of the detail mark with a leader. Detail symbols are used on not only floor plan but also elevation or section drawings.

Also Read: Architectural Drafting and Its Types – A Complete Guide

Elevation data are used to indicate a level line control point. An elevation datum has three parts. Farthest from the drawing is a ¼” diameter circle with two lines crossing inside horizontally and vertically, and the upper right part and lower left part are filled with solid black.

Above the horizontal line stretched out from the middle of the circle is a description of a point where a level is measured such as ceiling line, grade, or finished floor plan. The actual elevation that is the height of the point is described below the horizontal line. An elevation datum is generally used for exterior elevations.

Windows are identified by a window number symbol. A window letter symbol has a 3/8” diameter hexagon and a letter inside. The letter indicates either door number or door type, depending on the project. The letter is then referenced to the window schedule.

14 Best Plants That Clean And Purify The Air